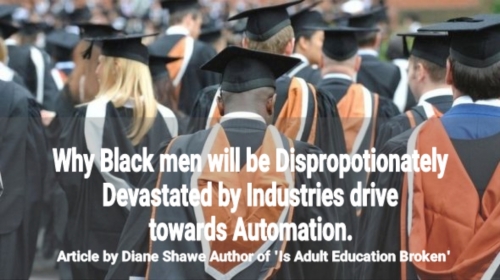 Black male graduates in London and throughout the UK are nearly twice as likely to be unemployed as their white counterparts, figures suggest. In 2016 there was an unemployment rate of 18% for black male graduates aged 16 to 24 in the capital.

According to the data from the Office for National Statistics (ONS), the rate for their white counterparts was 10%. A government spokesperson said the employment rate for ethnic minorities was “at a record high”. So if the graduates, the brightest and best are having such a hard time what about the lower skilled or unqualified black men?

But for now lets focus on London. More than 83,000 young men in London are from black and mixed black ethnic groups, making up about one in five of young men in the capital.

Research by the National Audit Office (NAO) has found that along with Pakistani and Bangladeshi women, black men consistently have the lowest employment rates in the UK.

BBC London contacted 50 of London 500 top graduate employers last year across the banking, accounting, medical, legal and retail sectors. Eleven were able to provide data relating to their employment of black men specifically. Those 11 organisations recruited 1,803 graduates in 2016. Of those, 30 were black men.

The NHS leadership academy, for trainee managers, was among those which did not recruit any among its intake of 112 graduates.

Larry Elliott Economics Editor for the Guardian headlined on 4th April 2018 that Workers at risk as robots set to replace 66m jobs, warns OECD he goes on to write:

The west’s leading economic thinktank has warned its members that they are failing to prepare workers for an automation revolution that will leave 66 million people at risk of being replaced by machines in the coming years.

A new report by the Paris-based Organisation for Economic Cooperation and Development found that the most vulnerable – one in seven workers on average across the 32 countries studied – were less likely to be receiving help than those whose jobs were more secure.

The OECD said 14% of jobs in developed countries were highly automatable, while a further 32% of jobs were likely to experience significant changes to the way they were carried out.

Low-skilled people and youth were among those most at risk, according to the report, with the jobs at highest risk tending to be in low-skill sectors such as food preparation, cleaning and labouring. Workers in fully automatable jobs were more than three times less likely to have participated in on-the-job training, over a 12-month period, than workers in non-automatable jobs. Those most at risk were also less likely to participate in formal education or distance learning.

In September 2017 Mr Lammy a Tottenham MP reviewed the BAME people in the criminal justice system and found that in the UK black people who make up just 3% of the UK population make up 12% of the people in prison at a cost to the tax payer of £309m each year.

Whilst the report highlighted failings on the part of police forces, courts and prisons, it was identified that other issues like one parenthood, school exclusions, low income and high unemployment disproportionately affect some ethnic minority groups and have been linked to higher levels of criminality. 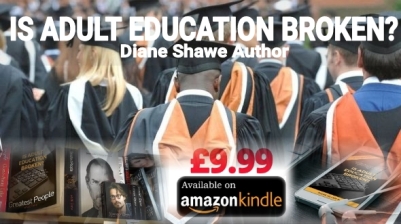 Diane Shawe author of ‘Is Adult Education Broken?’ states that “the traditional belief that we must prepare ourselves to be ‘employable’ is under threat for all groups, but has always inexplicably affected the BAME groups. The counter argument encourages us to ‘gear up’ for earning our own money, rather than seeing income as someone else’s responsibility”.

It is clear that at this moment most educational systems are not keeping pace with changing technology and the ever-evolving world of work.

A recently published book by #DianeShaweAuthor ‘Is #Adult #Education Broken’?  explores the main failings in the educational system for an economy powered by #technology, fueled by #information, driven by #knowledge and becoming #automated. What are the lessons to be learnt?

Download a copy from #amazon today Claim you copy now